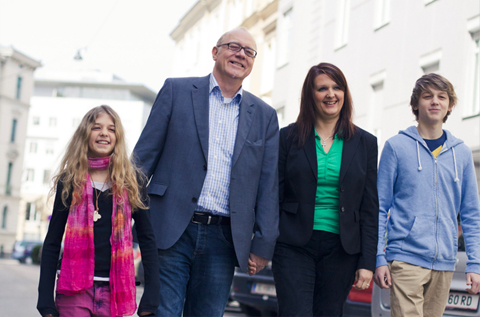 Hubert was born in Vorarlberg, the westernmost state in Austria. He grew up with five siblings in the family and they grew up Roman Catholic as most Austrians. He was a part of the local Catholic Church and was active in youth work.

For job related reasons, Hubert moved to Salzburg in 1990, where a year later he met his wife Sylvia. Sylvia had already given her life to Jesus Christ as a teenager. Sylvia and her friends faithfully shared with Hubert and three years later, on the 3rd of April 1994, Hubert also gave his life to Jesus Christ. In 1996 Sylvia and Hubert got married and now they have two children, Joshua and Tabea.

Hubert’s mom had always been very ill and she had been through many operations and spent most of her last years of life in the hospital. Once again (1997) Hubert got the news that his mother was not going to live much longer and would likely die within a few hours, so Hubert and Sylvia drove 350 km to the hospital that same night. When Hubert got there his heart was burning to tell his mom what Jesus Christ has done for her. By Gods grace she accepted Him as her Lord and Savior, five hours later, she went to be with Him.

In 2005, Hubert and Sylvia went to Texas with their kids for a few months. While they were there they attended a Bible-believing church in Dallas. Hubert started going to their men’s group and was blown away with how open and passionate these men were and how they really cared for one other in studying God’s word. Hubert had never experienced anything that way before and prayed that something like that would take place in Salzburg.

“But speaking the truth in love, may grow up into Him in all things, which is the head, Christ.” (Ephesians 4:15)