“I have been crucified with Christ; and it is no longer I who live, but Christ who lives in me; and the life which I now live in the flesh I live by faith in the Son of God, who loved me and gave himself for me.” (Galatians 2:20) 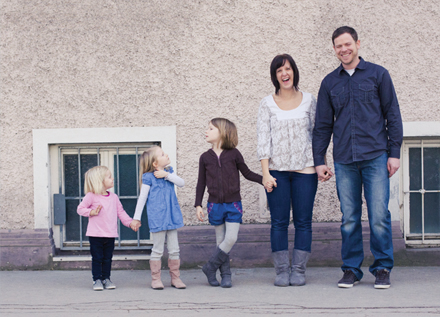 Pastor Ivan Ibbotson first heard the call to the pastorate in 2006 while living in Maple Valley, Washington simply working as an Auto body mechanic. Ivan strongly felt the Lord’s calling on his life to do more to spread the good news of the Gospel. Leading a “normal life”, married to Michelle with a daughter and baby on the way, a house and two dogs, he felt the Lord prompting his heart to return to his old stomping grounds in Salzburg, Austria and plant a church.

Years earlier the Lord had already been preparing his heart for the mission field, creating within him a desire to reach the lost through His word. Over 10 years (1998-2008) Ivan served faithfully in the youth group as a leader at his home church Calvary Chapel Eastside in Bellevue, Washington. It was then that the Lord used that time to mature and strengthen Ivan’s faith for the ministry that God had prepared for him in the future.

The Lord has His ways of revealing to us His plan for our lives, for Ivan it was through the Calvary Chapel Missions magazine, in the missionaries’ prayer requests section in the back of the magazine. The prayer request was asking prayer for a Bible believing church to be planted in Salzburg, Austria (a country steeped in tradition). Ivan himself having lived 12 years as a kid in Salzburg naturally had a deep burden for this city of his childhood. Through much prayer about a year and a half later he took the necessary steps to go forward in faith moving his family overseas. In July 2008 after the birth of his second daughter in May, Ivan and his family of 4 at the time said their goodbyes to family and friends and stepped out in faith on this adventure with the Lord.

A few weeks after arriving in Salzburg, a few people got together in a small home for a bible study, which in a few months later grew into a regular Sunday service and we have never looked back since. We have seen the Lord’s hand and His faithfulness and how He has sustained, strengthened and grown Calvary Salzburg as we simply serve Him and continue to grow in Him as we stay grounded in the word.

“Now to Him who is able to do far more abundantly beyond all that we ask or think, according to the power that works within us, to Him be the glory in the church and in Christ Jesus to all generations forever and ever. Amen.” (Ephesians 3:20-21)